How are you dealing with ‘non-performance’ in your business?

One of the biggest problems in most businesses today is the failure to deal with non-performance.  They’re wasting good money on non-performers or downright toxic employees…and it’s killing them. 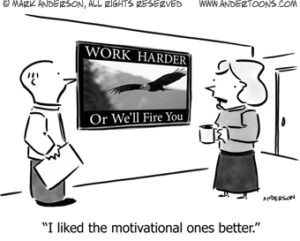 Then, there are the folks on your list who are not rescuable. Invite them to make an alternate career decision; but be smart about it.  Sit down with each of them and tell them, in a nice way, exactly what it is about their performance, attitude or behavior that is not acceptable and what ‘acceptable’ looks like.  Ask them by when they can make the required changes.

Some of them will quit right then and there.  This is good.  They leave with their dignity and no more of your money.  Some of them will tell you that they can make the necessary improvements. Get a specific time commitment and have them sign it.  Then, follow up.  If they haven’t done what they said they would do, now is the time to invite them to find an employer with whom they are a better fit.

So what will you do, starting right now, to deal more effectively with non-performance in your business?